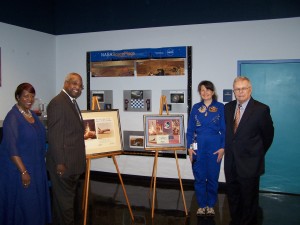 The Challenger Learning Center of Richland County School District One (CLC-RCSD1), where Richland School District One students and others are introduced to aeronautics and space-themed programming, launched into Aviation Week by adding two pieces of rare memorabilia to its educational collection on August 29, 2013.

One of the two framed pieces of historic material includes an astronaut’s patch and a small American flag that flew aboard the first mission of Spacelab 1, November 28-December 8, 1983. The other piece depicts the first Space Lab lift-off at Kennedy Space Center April 12, 1981.

The CLC-RCSD1 provides an inter-active learning experience integrating math and science curricula through simulations and scenarios. Students who visit the center augment their skills at decision-making, teamwork, problem solving and communications.

CLC-RCSD1 Lead Flight Director Dr. Carolyn Donelan said the framed memorabilia was given to the center by former University of South Carolina President James B. Holderman. “Dr. Holderman received the first of these two pieces from Columbia Space Shuttle Astronauts John W.Young and Robert l. Crippen only a month after the two returned from their historic shuttle mission. Young was commander on the first orbital flight of Space Shuttle Columbia, and Crippen was pilot.”

The second piece was a gift from Young on one of several return visits to Columbia, also on educational matters.

Donelan said the occasion on which the first piece was given to Holderman, who served as USC President from 1977 to 1990, was commencement exercises May 16, 1981. Young and Crippen, whose joint address to graduates was a roller-coaster ride of quips and patriotic messages about space exploration, also included the screening of a video taken on the shuttle mission.

“In reading the coverage of their presentation, I was reminded of the astronauts’ emphasis on education – which makes this gift from Dr. Holderman all the more appropriate – and appreciated,” Donelan said. “The astronauts told the commencement audience ‘The space shuttle is, in part, a product of the American educational system.’”

Holderman held onto the memorabilia given him by the astronauts, has looked at it frequently and recalled what it represents. “We were pioneers in space at that time.”

Holderman said USC was able to get the astronauts for the May commencement, just one month after they returned from space, via assistance from (the late) Sen. Mark Hatfield, R.Ore. “Having them here in Columbia, so soon after they landed, was a coup.” Holderman added that later Hatfield also was a big help in getting USC funding for the Swearingen Engineering Center.

Now in retirement, Holderman said he felt the pieces might serve to inspire young people, so he offered them to the CLC-RCSD1. “Young and Crippen are guys we’d want our young learners to emulate,” Holderman said.

When the heroes arrived in May 1981, Holderman picked them up at the airport and noted, “They didn’t realize the connection to Columbia, South Carolina – they didn’t know the Capital City had ‘adopted’ the space shuttle, in part because of its name. But when they were told, they thought it was cool.”

The appropriateness of Holderman’s presenting the pieces to CLC-RCSD1 during Aviation Week is that both astronauts began their careers as pilots for the U.S. Navy; their aviation skills and experience were paramount in their qualifications as astronauts.

South Carolina Governor Nikki Haley has proclaimed August 19-23 Aviation Week. Observances include a Media Day, Industry Day, Safety Day and a scholarship golf tournament, all sponsored by South Carolina Aviation Association. The University of South Carolina Film Library, which holds an important collection of aviation-related films and materials, is prepared for more traffic than usual to its link: